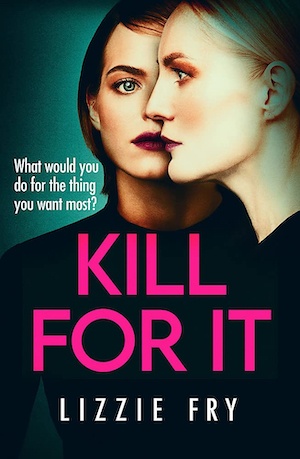 Our weekly news column comes to you with five new books you may or may not be willing to kill for. We’ve got four new novels including two with a bit of a Christmas theme, one involving rivals in the crime reporting profession, and an indie spy novel set in Taiwan and China. Plus, a non fiction read for anyone who loves rural noir.

Read on and see what you think. Would you kill to get your hands on a new crime read?

Kill For It by Lizzie Fry

Reporter Erin Goodman is on the crest of a wave. She’s good at her job and has worked hard to get to the top. But suddenly, Cat Sullivan seems to have the inside scoop, always in the right place at the right time for the juiciest news reports. When Cat ‘just happens to be in the area’ when a murder is called in, Erin can no longer ignore the long run of coincidences that seem to be giving her rival’s career a boost. It could be the biggest story of her career, but will Erin live long enough to file it? Kill For It by Lizzie Fry – AKA Lucy V Hay – is out now as a paperback, available on Kindle since August.
Order now on Amazon or Bookshop.org

Let’s unwrap some cosy crime in the shape of Jingle Bell Murder by indie author Hadley K Knox, out now. The third book in the Blue Lake series, set in the heart of the Adirondack Mountains, finds ice cream store owner Celia Strong helping out with a murder investigation. The town’s biggest tourist attraction is The Lady of the Lake, an historic paddle steamer, and it has been booked for a company Christmas party – but when the vessel returns to shore without the company CEO, Celia and Sheriff Denny DeWalt must solve the mystery.
Order now on Amazon

The Family Jewels by Caimh McDonnell

Christmas is coming and Detective Bunny McGarry is not in the festive spirit. His bah humbug meter hits 11 when an old friend becomes the victim of a violent assault and, for reasons he can’t understand, Bunny’s fellow officers refuse to investigate. Throw an Italian heiress, the gardai commissioner and a teenage boy swearing vengeance into the mix and is looks like the New Year can’t come fast enough. Book seven in Irish comedian and author Caimh McDonnell’s Dublin Trilogy (yes, really!), The Family Jewels is out on 15 December.
Order now on Amazon

Emperor Qin, absolute ruler, dictator for life, has an ambitious and potentially catastrophic task to complete before he succumbs to brain cancer. He wants to ‘unify’ China by ordering the conquest of Taiwan, a democratic nation of 23 million people just 100 miles off the mainland. It is a pledge the Chinese Communist Party has made every year since the 1949 Revolution and it could erupt into World War III. Can ex-spy Ava Shute stop him in time to save millions – and escape with her life? Find out when Emperor by John Fullerton is published on 9 December.
See the author’s website

Beyond Twisted Sorrow: The Promise of Country Noir by Jay A Gertzman

It’s a genre of many names, including Country, Redneck, Ridgerunner and Ozark noir – but what makes this branch of crime fiction so attractive to readers? Jay A Gertzman explores the subject in Beyond Twisted Sorrow: The Promise of Country Noir, a tasty non-fiction read that’s out now. In it, he explores the motivations and misconceptions of the often downtrodden protagonists of rural fiction. They’re people without a voice, whose struggles create a sense of perseverance and strengthen family bonds as they battle to survive and thrive.
Order now on Amazon