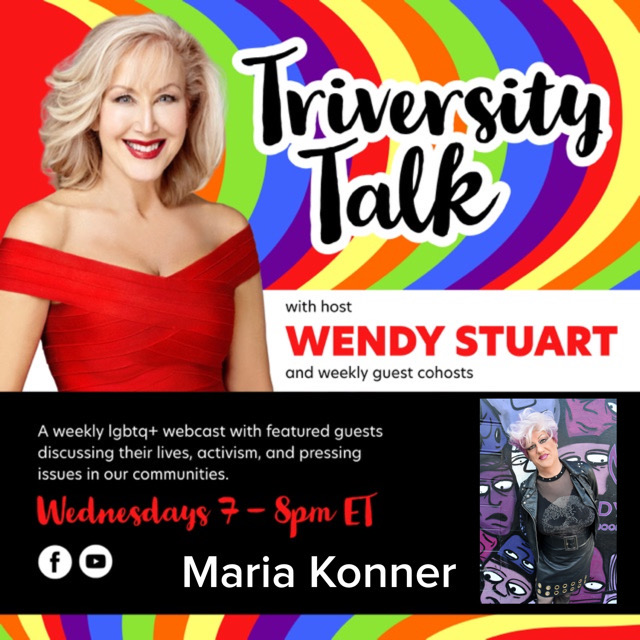 TriVersity Talk! is a weekly web series with featured guests discussing their lives, activism and pressing issues in the LGBTQ Community. With TriVersity Talk!, the goal is to laugh and learn.

After escaping from her straight dude suburban life, Maria Konner moved to San Francisco where she was born and explored and rocked the city for over 15 years. She moved to NYC in the summer of 2022 to join the fabulous performance scene playing jazz/blues/cabaret piano and rock guitar at various venues playing and singing mostly original songs as well as covers. She is also a host for her YouTube channel underthegoldengate.com where she performs, interviews guests (and some celebrities too!), and films various events around town interviewing people – she is restarting this in NYC.  ‘I don’t have the gay gene, I have the trans and kink genes”, she always jokes when it comes to music and pop culture. ”At the piano bar, they expect Judy Garland, but I give them Sweet Transvestite, Pink Floyd and Black Sabbath. I know almost nothing about TV shows, but I love talking about the Cosmos.” Maria wrote a book Girl Shock! I Dressed as a Girl for Halloween and then She Took Over My Life about her fun and fabulous life – complete with lots of details, pictures, and links to her videos.

​Maria started off as an engineer in the Tech world, then migrated into corporate management consulting, financial planning, marketing/sales, and lobbying. She wrote several books about green energy and corporate politics, but got so fed up with that world, she then decided to try something completely different and live a trans life in San Francisco. Originally from Jersey just outside NYC, Maria’s love of the unique, authentic, and colorful started with her spending a large part of her childhood in East Africa, The Middle East, and London/UK, and filling her alone time with books and science documentaries. After coming back to the US, she didn’t rediscover that self until she landed in San Francisco. She was so fascinated and inspired by the people she met, she created a web channel to capture it via hundreds of videos.

​Maria has a biomedical and electrical engineering degree from Case Western Reserve University and an MBA from Carnegie Mellon University where she was the valedictorian. She has a love-hate relationship with education as she believes that too much education distracts one from where the real education is, down in the trenches. Maria considers herself to be a musician above all else. ”Good music can’t lie. I don’t listen to words all that much. I care about the vibe more than anything else―it doesn’t matter if it’s a song, a conversation, a business, or a group effort”.

​These days Maria is working from home as a cybersecurity architect, hitting the NYC performance venues, producing new shows and writing down ideas for her next book.

The official website for the TriVersity Center may be found at https://www.triversitycenter.org

Subscribe and listen to TriVersity Talk! on Apple Podcasts/iTunes here: